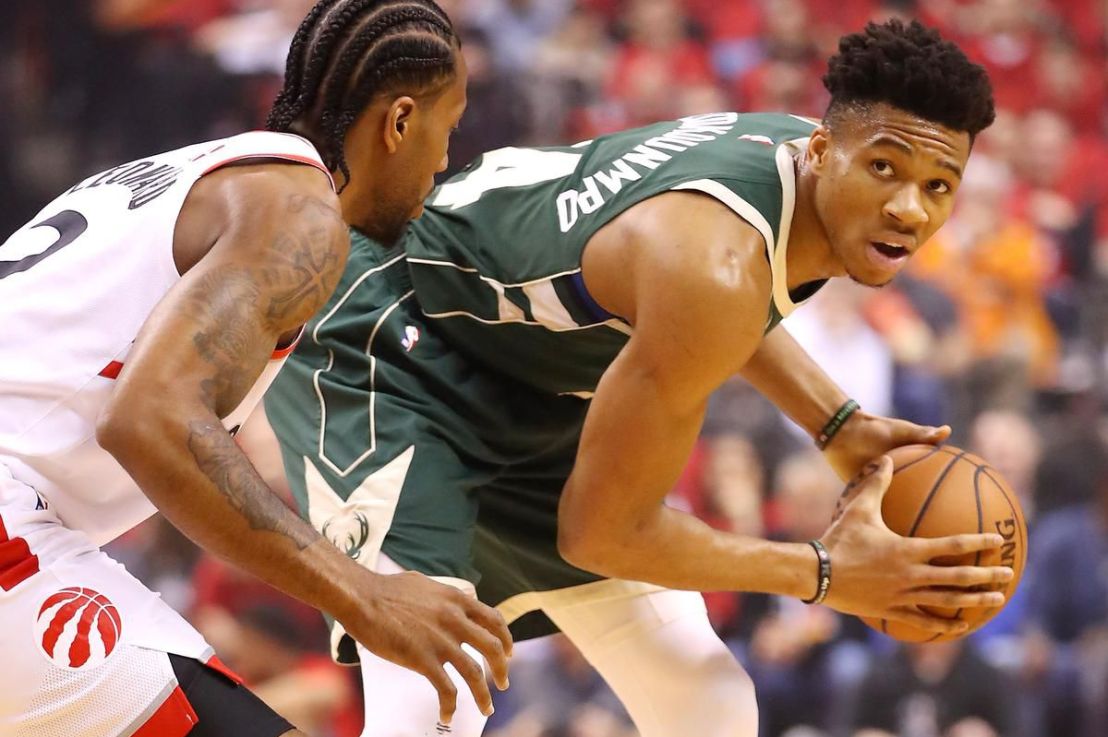 Let’s travel back two weeks ago. The Milwaukee Bucks had just dismantled the Toronto Raptors 125-103, taking a commanding 2-0 series lead in the Eastern Conference Finals. Everyone was ready to crown the Bucks the Eastern conference champions and officially pass the torch from LeBron to Giannis as the next “best player in the world”. But hold that thought, behind a legendary Kawhi performance, the Raptors came storming back, winning four straight games – the first time Milwaukee had lost three straight all year – sealing a trip to the NBA Finals.

These last two weeks have been a great history lesson to us all, a reminder that all superstars have to pay their dues and earn their stripes in the playoffs and the Greek Freak is no exception.  Make no mistake about it, no one is better equipped to reign over the Eastern conference and become the face of the league over the next five years than Antetokounmpo – difficult name be damned. He and the Bucks dominated the regular season from start to finish – a league-best 60-22 record and +8.6 net rating. Giannis, himself, made the leap all basketball fans had been rooting for after averaging a ridiculous 27.7/12.5/5.9 on 58% shooting with 30.9 PER. A scary prospect for league prognosticators is where he goes from here as a 24 year old (!) with so much room to develop offensively. With an already legendary work ethic, his ball handling, shooting, and passing will all continue to improve making the sky the limit.

His counterpart in this series, Kawhi, stayed below the radar this season after spending the 2017-18 season involved in a bizarre, injury-plagued season with the San Antonio Spurs.  After missing almost an entire year, Kawhi eased back into action during the regular season – the Raptors opted for “load management” and had him rest during the second game of all back-to-backs, ultimately playing only 60 games. Despite missing Leonard in those remaining 22 games, the Raptors finished 2nd in the East with a 58-24 record. The  Raptors prioritized this postseason run and they capitalized on a rested Kawhi in the Conference Finals.

Coming into the series, the Bucks were favored after coasting through the first two rounds of the playoffs with easy defeats of the Detroit Pistons  (a 4 game sweep) and the Boston Celtics (a gentleman’s sweep – 4-1). The Bucks looked like they were poised to reach the NBA Finals for the first time since 1974, especially after Toronto battled through a grueling 7-game bloodbath against Philly’s 76ers just to get there. The Bucks were well rested after six days off while the Raptors 2 days off to lick their wounds from the previous round. Against the 76ers, Kawhi played 40 minutes/game and carried the load offensively (35.6 usage) and defensively, locking down the 76ers wings like only he can.

This could not have set up better for the Bucks, and after two games, the series looked all but over. Antetokounmpo continued his dominant postseason run receiving  great help from the supporting cast (29 points from Lopez in game 1), as the Bucks held Toronto to 35% shooting. Kawhi did his part averaging 31 points and 8.5 rebounds over the first two games but it wasn’t enough to prevail.

Everyone questioned whether Leonard and the Raptors had anything left and many thought they were done, including me. Going into game 3, the only hope for Toronto is that Drake and Jurassic Park would bring the Raptors back to life and give them a chance in this series. And that is exactly what would happen as the Raptors won games 3 and 4 at home to even the series, including a brutal two-overtime struggle in game 3 that Kawhi wouldn’t allow them to lose (35/9/5).

With the series headed back to Milwaukee tied 2-2, the Bucks were still favored with the home court advantage, but the Raptors had stolen the momentum. And after four games, it looked like they had the best player in this series. In games 5-6, the Raptors made the necessary adjustments to contain the Greek Freak, making him work for everything, had two huge Kawhi games (31/12/8, including a career high in assists in game 5 and career high in rebounds in game 6), and incredible minutes from Fred VanVleet (21 points on 11/14 3pt shooting). In wake of their game 6 victory Saturday night, Drake and the city of Toronto partied like it was 1999 and almost burned down the city in celebration of the Raptors first Finals appearance in franchise history. And why not?  This is the biggest moment in franchise history for one of the best fan bases in the country.

This series saw ebbs and flows throughout, but the two constants in this series were Kawhi and Giannis, clearly the 2 best players in this series, the East, and maybe the world. After an MVP-caliber regular season, the next question to be answered was Giannis ready to make the leap in the playoffs as well. The Greek Freak seemed poised and ready to do so after the first two rounds where he averaged 27.4 points, 11.4 boards, 4.4 assists on 52% shooting. Against the Raptors, overall, he had a fine series with 22.7 PPG, 13.5 RPG, 5.5 APG and 2.7 BPG on 44% shooting, but was able to come through when it counted the most.

Giannis’ ability to create shots and make plays for teammates in the half court against a  locked in Raptor’s defense proved to be his achilles heel down the stretch in these games. Take a look at this compilation from last series.

You’ll notice when Giannis had the ball at the top of the key all four help defenders had a foot in the paint ready to help on the drive as their first priority (secondary priority was to recover back to shooters). In many instances, Giannis sloppily over-dribbled into the help forcing errant passers to shooters allowing the defense to recover. You didn’t see the Greek Freak dominating the paint like were accustomed to. He still dominated in transition this series, but against a set half court defense on the same page like the Raptors, he had no answer.

If he continues to improve his shooting, ball handling, and passing, he will able to attack similar defenses more effectively and feel more comfortable in the biggest moments when everything is on the line. He’ll also need to know when to pick and choose his spots and take over the game when his team needs him down the stretch (we’ve seen this from Kawhi all postseason). That’s the next step in his maturation and I have no doubt he will add additional tools each off-season  to take his game to the next level.

His foe in this series has been the most dominant force (both offensively and defensively) in the playoffs and outplayed the potential MVP during their six-game series victory. During his historic playoff run, Kawhi has averaged 31.2 PPG, 8.8 PPG, 3.8 APG on 51% shooting while leading the playoffs in minutes, points, and win share. On top of his offensive production, he has shut down the likes of Aaron Gordon, Jimmy Butler, Ben Simmons, Giannis Antetokounmpo, and Khris Middleton on the defensive end, once again proving to be the best on-ball defender in the league. In his much anticipated showdown against the Greek Freak and the Bucks, Leonard had the upper hand in the series, averaging 29.8 points, 9.5 boards, 4.3 assists, and 2.3 steals over the course of six games, while holding Giannis to 30 points on 35% shooting and forcing more turnovers than assists in 160 possessions. He also got the better of this showdown with Antetokounmpo at the rim in game 6, a memory only bested by Kawhi’s series-winning buzzer beater just two weeks before.

Not only did he carry the offense, but when it mattered most, in the second half of games 5 and 6, Kawhi stepped up defensively taking it upon himself to shut down the unstoppable force that is Giannis.

Coming into this series, the question was whether Giannis could lead his Bucks to the promised land in his first deep playoff run or would Kawhi carry the Raptors to victory with two-way prawless. After six games, Leonard showed he was the best player in this series and made a great case as the game’s best two-player (KD would have something to say about this if still healthy). In his first season without Pop and the Spurs foundation, he proved he could handle the workload offensively (33.1% usage in the playoffs) and defensively (see above) while raising his game to the next level when his team needed him the most. By all accounts, Giannis had an unbelievable regular season and a great postseason, so it wasn’t that he choked or the stage was too big for him. He just ran into a buzzsaw and basketball robot in Kawhi Leonard as well as a better game plan from Nick Nurse and his staff than the Bucks’ counterparts. Like many of the greats before him (see Jordan vs. the Pistons and Lebron’s Cleveland years), the Greek Freak will have to pay his dues and learn from the league’s incumbent stars before climbing the NBA mountaintop. And when it comes to playoff performance, it’s hard to find a better teacher than Kawhi (see this postseason and Finals MVP at 22). With his great attitude, Giannis will look at this postseason loss as a learning opportunity and there is no way he doesn’t come back better and hungrier next year.

Looking forward, there are questions surrounding both of their futures. The first question to be answered in the next few weeks: Can Leonard cap off one of the greatest playoff runs ever by dethroning the two-time defending champ, Warriors? And the answer to that question, should impact the biggest question surrounding him: Where will Kawhi end up next year? Would winning the title convince him to stay and build on his now-iconic status in Canada or would he consider his work in Toronto done, go out on top, and take his talents to LA? Your guess is has good as mine because, other than Uncle Dennis, I’m not sure anyone has any idea what’s going on in his mind.

Giannis’ immediate future is more certain with two years remaining on his contract. But with today’s NBA player empowerment era, the question looming is: will he remain happy in a small market. Most other super-duper stars have wanted to play in a bigger market, but Giannis seems more than content in Milwaukee. How they perform over the next two years will obviously heavily influence his decision when the time comes. And this offseason they have plenty of questions to answer with key pieces, Brogdon (going to get a big pay day), Khris Middleton (should make $20 million/year), Brook Lopez (due a lot more than his $3.3M this year), all up for free agency (not to mention Mirotic). It will be interesting to what the Bucks do in the offseason, but no matter what they or anyone in the East does in the offseason, they will be one of the favorites in the East (if not the favorite once again).

While the present may be dreary after their Conference Finals collapse, Milwaukee’s future looks bright with the league’s most exciting player vying for the league’s best player championship belt and championships in the years to come. As has been the case all year, in perhaps Kawhi’s only year, there is no time like the present in Toronto. Over the course of the next two weeks, Leonard has the chance to do the unthinkable, taking down the mighty Warriors to cap off an all-time playoff run and cementing his status as the game’s best all-around player. While Kawhi once again competes on the NBA’s grandest stage, Giannis will be watching with us at home pondering his next move, and that should make everyone scared.