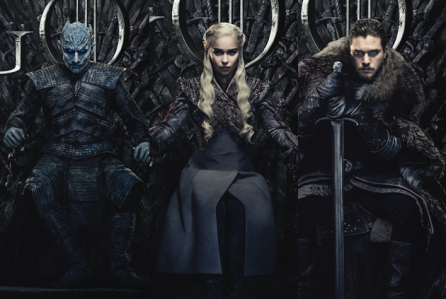 On Sunday, the final season will premier with the first of six episodes concluding the beloved HBO show based on George R.R. Martin books.  Game of Thrones is a beautiful collaboration between the expansive universe that George has created in the books with it’s characters and story lines and the adaptation to the television screen led by David Benioff and D.B. Weiss.  One would not succeed without the other and, at its core, I believe the show is at its best when it can be both a fascinating story and ground breaking cinematic achievement.  Like many fans, I need a refresher on the story this show has told.  Like many fans, I don’t have the time in my life to re-watch all 67 episodes.  So I’ve made a list of my most impactful episodes.  For the popcorn cinematic battles: Blackwater (Season 2, Episode 9), The Watchers on the Wall (Season 4, Episode 9), Hardhome (Season 5, Episode 8), Battle of the Bastards (Season 6, Episode 9), The Spoils of War (Season 7, Episode 4).  No deep dive needed, just copious amounts of fire and blood.  To understand the twist, turns and reveals that placed each of our favorite characters where they currently are, I picked the following 6 episodes in order.

2. The Rains of Castemere (Season 3, Episode 9)
If you didn’t read the books you were absolutely blind sided by this one.  But the hints were all over the place, from the title of the episode to the continuous conversations questioning Walder Freyy’s motives and integrity in the Stark camp.  But what they really shouldn’t have done is underestimate the Freyys, the Boltons and the Lannisters.  People were posting their friends reactions to the final sequence of this show on youtube and you better believe these videos went viral. Everyone will forever remember where they were when they watched the Red Wedding.  This may be the legacy of the show.  After Baelor and this episode I was thoroughly convinced that anyone with an ounce of honor or dignity in this show was going to die a horrible death.

3. The Children (Season 4, Episode 10)
In my opinion, one of the more well executed season finales the show has had.  Four characters in the show find themselves in transitional periods while their stock with the audience are at all time highs.  Danerys the breaker of chains finds herself ruling the city of Meereen and having to make real adult choices that any ruler/politician must make when serving all of her people equally.  Although slavery was never morally ambiguous in her mind, the repercussions of freeing all slaves at once, young and old, have undesired effects in the lives of her people.  This tough choice is illustrated by her chaining her dragons Viserion and Rhaegal in the Dragon Pit of the Great Pyramid of Meereen.  Tough look for the breaker of chains.  Jon Snow finds himself triumphant after the siege on Castle Balck and immediately makes the decision to go on a suicide mission to kill Mance Rayder to save the surviving members of the Nights Watch.  His intentions are thwarted by Stannis Baratheon’s cavalry taking Mance and the Free Folk prisoners.  Jon is now a bonafide badass and his favor with Stannis makes him the natural leader of the Nights Watch.  Tyrion Lannister may have had the highest approval rating at the time of this episode.  Hoards of people were outside the HBO offices shouting: ‘IF PETER DINKLAGE DIES, I’M DONE WITH THE SHOW’.  Not really, but you get the idea.  After Oberyn Martell agreed to be his champion for the trial by combat against The Mountain, when both Jamie and Bron had refused, we catch a glimpse of hope only to be set for the emotional spike of seeing a man’s skull being crushed on TV.  This felt eerily familiar to the audience having flashbacks to Ned Stark’s sentencing: ‘Sir Ilyn Payne, BRING ME HIS HEAD’.  Instead Jaime and Varys liberate Tyrion from his cell the night before the execution but not before Tyrion has last words with his father.  Tyrion finds Shae in Tywin’s bed as a sign of ultimate betrayal and murders her with his own hands.  If Tyrion had walked in there with any doubt to kill Tywin he didn’t have any now, shooting two arrows into the Lannister patriarch’s chest while sitting on the privy.  Tywin was arguably the strongest player on the chess board at that time and this marks the point of no return for Tyrion.  He is no longer a Lannister and eventually would redefine his life’s purpose serving Danerys as hand of the queen.  On her way to the Eyrie, Brienne of Tarth and Pod cross paths with Arya and the Hound.  This ensues one of the most brutal duels we had seen in the show, including crotch shots for both parties.  Arya ultimately escapes on her own and leaves the Hound to die.  She transitions out of this road trip of peril from the time her father is decapitated in Kings Landing to setting sail to Braavos.  This is the happiest this show has ever made me feel.  Including the end credit score titled ‘The Children’ by Ramin Djawadi on the Season 4 soundtrack.  When the show whispered Valar Morghulis I replied Valar Dohaeris.

4. The Door (Season 6, Episode 5)
Bran discovers that the White Walkers were created by the Children of the forest in order to defend themselves from the first men.  Euron Greyjoy is introduced and claims the seat of the Iron Islands over Yara.  We couldn’t care less about the Theon Greyjoy saga but Euron will play a part in this last season presumably transporting the fabled Golden Company across the Narrow Sea.  The last 24 minutes are the reason this episode is in this list.  Bran visits the Night King on his own and gets marked by him, thus nullifying the protective powers of the weirwoods.  Is time for Bran to become the Three-Eyed-Raven without proper preparation.  The extent and repercussions of Bran’s powers are a mystery to all including Bran.  His ability to travel back in time and warg into young Hodor’s mind creating this loop that permanently affecting Hodor’s mind is quite tragic as we loose this big friendly giant while he does the one thing he’s been asked to do his entire life.  He had one job and we salute him for it.  I’m not crying, you’re crying!

5. Winds of Winter (Season 6, Episode 10)
This episode begins with a 20 minute sequence accompanied by a piano score which had never been heard in the show and felt quite novel.   Cersei wipes out 75% of her immediate problems, including house Tyrell and the High Sparrow,  by blowing up the Great Sept of Baelor.  Her last living child and king of the seven kingdoms jumps into his own death at the Red Keep.  That’s why they call it King’s Landing!
Without any of her kids alive, Cersei no longer has a clear reason to live and fight.  Her drive in this game is no longer clear to the audience which makes her quite the wild card as she currently sits on the Iron Throne. Arya slits Walder Freyy’s throat after she feeds him a pie made of his son’s body parts. For the book fans and reddit theorists this trip back to the Tower of Joy affirms that Jon is the son of Rhaegar Targaryan and Lyanna Stark (R+L=J) and legitimate heir to the Iron Throne.  Truly the greatest reveal awaited for 25 years.  Followed by the Northern houses naming Jon The King in The North.  Juxtaposed with Arya sailing east at the conclusion of season 4, this episode is capped with Danerys finally sailing to Westeros with her fleet and her dragons.  Something that’s been in the making since episode 1. 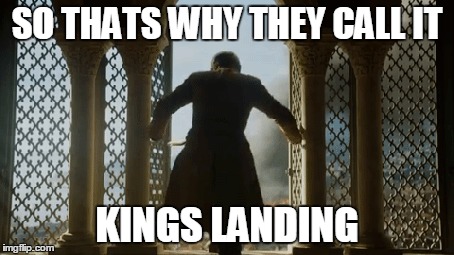 6. The Dragon and the Wolf (Season 7, Episode 7)
If you’re going to re-watch one episode in preparation for this season it makes logical sense to watch the last episode aired.  We open the episode in the Dragon Pit with an epic meeting of all the players.  For so many seasons this universe expanded and finally we’ve begun to consolidate.  All of the real players in this game are gathered in the same place for once and the results are epic stare downs topped by Danerys riding in on Drogon, the winged shadow.  To everyone’s surprise, the meeting doesn’t have the desired effect (collective eye roll).  But it does send people in different directions.  Euron is on his way to fetch the Golden Company while everyone else is on their way to Winterfell to fight the army of the dead.  Sam and Bran combine their knowledge to confirm that Jon’s real name is Aegon Targaryan.  Meanwhile Aegon Targaryan makes sweet love to his aunt on the sex boat as they sail north.  Will there be a sex boat baby?  Jaime finally cuts ties with Cersei and gallops in that direction, not as the  swordsman he once was but a formidable general and battle tactician with a weakness for dragons.  As the lady of Winterfell, Sansa sentences Little Finger to die and Arya slits his throat.  The season is capped with the Night King riding Ice Viserion and bringing down the 700-foot-wall built with protective magic by Bran The Builder 8,000 years ago.  Every character is at the peak of their powers.  This is the final stretch.  We’re in the endgame now.