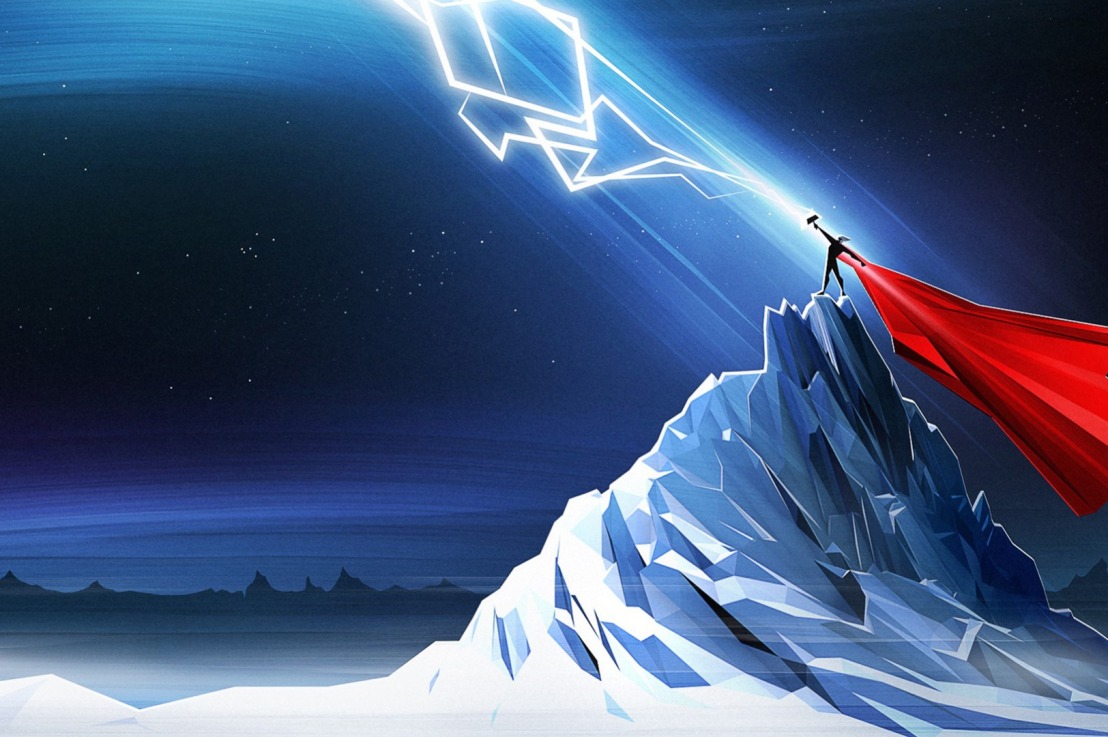 If we were smart, we wouldn’t post two comic book themed things in a row. But as we’ve proven – and will continue to prove until the day we die – we’re not smart.

Plus, have you seen this fucking trailer? Take a 1:52 and improve your day. We’ll wait.

What did I tell you? Marvel has been crushing it lately , and the newest teaser for Thor: Ragnarok is no exception. “Ragnarok” is a term from Norse mythology meant to signify “the end of all things”. It’s essentially the Asgardian version of a meteor striking the Earth in that it’s devastating and has already happened multiple times. It’s like Armageddon, but with more bicep curls. We get a little taste of what all that destruction might look like, with no real plot exposition. But the movie doesn’t come out until November so that makes perfect sense. If we’ve learned anything from the Batman v. Superman trailers, it’s that less is more with these things. We definitely got more than enough for even the Internet to take a break from raking United Airlines over hot coals and broken glass to collectively freak the fuck out. Let’s break it down.

Out of the gate, Marvel has been calling this a sort of “intergalactic buddy cop movie” with Thor and Hulk as Riggs and Murtaugh (which is also a movie I would watch, by the way). This trailer is leaning hard into a multitude of 80s cliches from Thor’s voiceover (**RECORD SCRATCH** “Yup, that’s me. You’re probably wondering how I got here….”),to the soundtrack (ZEPPELIN!).

Next, we get our first look at Cate Blanchett as Hela, absolutely killing it with those goth cheekbones, but looking weirdly similar to Elizabeth Banks’ Rita Repulsa. For the unaware, Hela is the Asgardian goddess of death, ruling over both Hel and Niflheim, one of which is probably the fiery dimension we see Thor chained up in when the trailer starts. In the comics, Hela is actually the daughter of a previous incarnation of Loki who died in a previous Ragnarok, but that’s so convoluted and unnecessarily confusing that I doubt they touch it at all.

Confronting her in what looks like the kind of alleyway Spiderman changes clothes in, Thor uses the old “I’m going to throw this hammer at you as hard as I can, and I bet you can’t catch it” strategy he’s perfected over the years. Hela parries by catching the hammer in a large “Fuck You”, which seems oddly familiar, and then she BLOWS IT THE FUCK UP. There goes Mjolnir. If you subscribe to the theory that Thor’s hammer is just a metaphor for his dick, Hela just ripped it off and “Otto von Bismarck-ed” him in the face with it (look it up, then clear your history). Gauntlet lain.

We get a few more glamour shots of Blanchett as Hela, both in her traditional comic headgear and razing the hell out of Asgard by herself. This clusterfuck somehow throws Thor all the way to the junkyard planet of Sakaar. Still hammerless, he immediately gets snagged in a taser net by a guy doing a great “Johnny Depp in Lone Ranger” cosplay. An unconscious Thor is dragged away by Tessa Thompson’s Valkyrie, whose comic history is as convoluted as Hela’s. Long story short, she’s an Asgardian warrior badass who fell out of favor with Odin, somehow. The shots later in the trailer of a group on winged horses flying towards an irate Hela is most likely a flashback to Valkyrie’s previous life.

In this iteration, it seems Valkyrie is some kind of bounty hunter working for Jeff Goldblum’s Grandmaster, one of the Celestials, a group of beings older than the universe itself. The Grandmaster is also brothers with Benicio del Toro’s Collector from “Guardians of the Galaxy” providing a possible connection between Ragnarok and May 5th’s Guardians of the Galaxy Vol. 2. As far as I can tell, Jeff Goldblum has reached this point where he’s just playing himself in most of his movies, but he’s such a weird, eccentric guy, he end up making sense no matter where you put him. Space-Goldblum with blue lipstick, eyeliner and a cowlick? Done, sold, I’m already there. I mean, it’s fuckin’ Jeff Goldblum.

Valkyrie tells the Grandmaster she has brought him “a contender” and we see Thor get the Samson treatment when his hair gets cut for intergalactic basic training. It seems he’s now a competitor in some kind of gladiator contest, and it’s unclear how much of his power he still has without his hammer.

We transition to quick shots of spacecraft, Idris Elba’s Heimdall, dressed as Bishop from the X-Men for some reason, Karl Urban as the Asgardian Skurge a.k.a the Executioner wielding dual M-16s, and Tom Hiddleston’s Loki tossing his trademark daggers and wearing his trademark horned helmet for a change.

Thor, clearly jealous of Loki’s helmet a frame earlier, enters the gladiator arena for what could be his first or final fight as the Grandmaster and a nervous Loki look on. Who’s his first opponent? Apparently, this dude is a big deal. Who is it?

So, THAT’S where Bruce flew that jet at the end of Age of Ultron instead of shacking up with Black Widow: into fuckin’ space to be Sakaar’s version of Brock Lesnar (he wins a lot of fights, he’s gigantic, and he’s 100% using foreign substances). It looks like Marvel is adapting the Planet Hulk storyline to fit into Thor’s movie. There’s this weird deal where Hulk’s film rights for solo movies are actually the property of Universal Studios, but Marvel Studios can use him as a supporting character in anything they want. Plus, if we’re being really Oprah honest, Hulk works better as a supporting character anyway. Alone, his movies are so goddamn sad. It’s like watching Batman go to therapy.

What comes next is the funniest moment in the trailer as Thor geeks out like Buddy the Elf seeing Santa. “WE KNOW EACH OTHER! HE’S A FRIEND FROM WORK!” Thor’s just happy to see his buddy, but it looks like Hulk either doesn’t remember or doesn’t care, because he and his 5 o’clock shadow are 100% ready to whoop ass. Thor steels himself, they both charge, and we close out with the classic Rocky III 80s freeze frame.