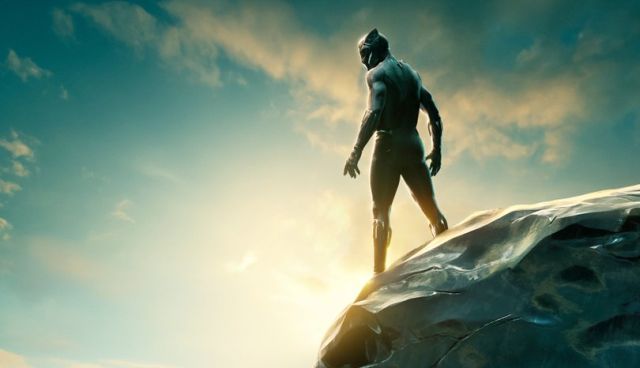 You had to have seen this coming. And no, it couldn’t wait even twelve hours from release. I’ve watched this trailer like 8 times today. Is this how white women feel when they watch Wonder Woman? Yo, is this how white dudes feel ALL THE TIME? I’m so hype I feel like I could punch a hole through sheet metal right now. Marvel has definitely nailed the art of “Here’s something small and non-descript to remind you should also be unnecessarily hype for THIS.” T’Challa did not speak ONE WORD in this trailer and I would pay upwards of $50 if I could see this movie tomorrow.

We start with a shot of Bilbo Baggins and Smeagol…I mean, Martin Freeman and Andy Serkis, reprising their roles of UN liaison/stuffed suit Everett K. Ross and shady “arms” dealer Ulysses Klaue, pun definitely intended. Klaue is nice and chained up, looking like he just came back from a fight club for well-dressed scumbags.

“What do you know about Wakanda?” he asks.

And based on what we were able to see in the end tag for “Captain America: Civil War”, he’s absolutely right.

Drawing comparisons to the lost golden city of El Dorado, Wakanda is a fictional African nation that owns the entirety of the world’s supply of vibranium, the mysterious element used to craft Captain America’s shield. At $1,000,000 an ounce, vibranium is one of the most valuable, malleable and powerful substances on Earth, found inside a meteorite that landed in the country 10,000 years ago. The Wakandans are sitting on close to 50 tons of the stuff. It would be like if Peru owned all of the world’s oil. And the moon. The king’s claim to those riches gives him a net worth that makes Tony Stark look like Tony Shaloub. As such, Wakanda is one of the richest most technologically advanced nations in the world and keep to themselves to make sure it stays that way.

“I’m the only one who’s seen it and made it out alive,” Klaue continues to boast. He’s referring to, of course, the time he stole the Wakandan vibranium, which he then sold to Ultron and had his left arm removed for his trouble. The overused, Inception-style cliche “BWAAAMS” kick in, but suddenly morph into the syncopated bass line of “Legend Has It” from noted Panther collaborators Run the Jewels (another fire song choice). We see a group of armed, but skittish mercenaries scoping a dark jungle, until a stray dog barks at what they missed: there is a very large cat stuck in this tree.Black Panther descends and proceeds to very quickly whoop ass, taking multiple bullets with less annoyance than most people show ants at a picnic.

The Black Panther is Wakanda’s famed protector, a mantle handed down from warrior to warrior after they have completed the “Panther Trials”. They are honor bound to protect Wakanda from any that may harm her or her people, keeping the sacred lands sovereign. As far as his fighting style, it’s quick, but delicate, a cross between Spiderman’s acrobatics and agility and Captain America’s brute strength. The vibranium armor the Panther wears is arguably as advanced as Tony Stark’s Iron Man armor, only with the emphasis put on stealth and agility instead of flight. With it, he has enhanced speed, can fire powerful energy blasts, and scale buildings

We flash back to the interrogation room as Klaue now laughs maniacally. “I can see you!” he taunts, as it’s revealed that Chadwick Boseman’s T’Challa stands on the opposite side of the one-way glass. By his side is Okoye, a member of the Dora Milaje, being played by Danai Gurira a.k.a Michonne from “The Walking Dead”. You know how badass Michonne is? Okoye is like the older sister that mercilessly whoops her ass on a regular basis. The Dora Milaje are Wakanda’s all female secret service, and the bodyguards to King T’Challa. It’s essentially what would happen if the Beyonce instructed the BeyHive to become an actual army.

The Marvel Studios logo hits, fading from red to black, continuing the trend they started with Dr. Strange. We get some absolutely gorgeous shots of Wakanda from Quin-Jet like ships to skyscrapers to showcase their technological advancement. Between this movie, “Guardians, Vol. 2” and “Thor: Ragnarok”, these Marvel movies are getting colorful as hell. Director Ryan Coogler (“Fruitvale Station”, “Creed”) is already going massive in scope to convey Wakanda’s strength and I can’t imagine how good a finished version of this would look like 8 months from now.

There are shots of Forest Whitaker as Zuri, the high priest and former advisor to T’Challa’s father, T’Chaka. They are quickly followed by a shot of a man in an ornate gazelle mask and military armor breaking Klaue out of jail, We can assume this to be Michael B. Jordan’s Erik Killmonger, a main antagonist of the film. Formerly known as N’Jadaka before changing his name, Killmonger is a Wakandan exile who holds a powerful grudge against T’Challa’s father. He’s the mental and physical equal of the Black Panther in the comics, a master tactician who once even managed to best T’Challa in combat.

“The world is changing. Soon, there will only be the conquered and the conquerors,” the deceased King T’Chaka warns in a voiceover as T’Challa’s all “Come at me bro”. We see Lupita Nyong’o for the first time as she walks through a casino. She will be playing Nakia, leader of the Dora Milaje, and T’Challa’s main love interest. The Dora Milaje strength is demonstrated in the very next clip as Okoye does some sick spear work and drop kicks a grown man through a wall.

Next, we see T’Challa in his traditional garb, speaking before the U.N. and ascending to his throne as El-P remarks “Step into the Spotlight”. One of the challenges for him in this film will be juggling the roles of chief warrior and king that have never before been held by the same man. Though T’Challa leads the entire country of Wakanda, it is comprised of several different tribes, several of which would like to see him deposed. It’s not customary for the king to be able to fight those battles himself so where does T’Challa draw the line between diplomacy and demonstrations of force? “You are a good man with a good heart,” his father remarks “and it is difficult for a good man to be king.”

Challenges stand, seemingly, on all sides as we are treated to a shot of Killmonger being led into the royal chambers by W’Kabi, T’Challa’s most trust advisor (played by Get Out’s Daniel Kaluuya). We see Killmonger taking on T’Challa and then an entire squadron of the Dora Milaje. There are glimpses of a tribe in the south led by the fearsome M’Baku, played by Winston Duke. M’Baku is the man who would become Man-Ape in the comics, imbued with the spirit of the white gorilla, which gives him enhanced strength and speed. It seems at some point he will look to compel T’Challa by capturing Ross and his mother , Ramonda, played by Angela Bassett.

The trailer winds down with quick shots of an advancing, armed Nakia accompanied by T’Challa’s younger sister, Shuri, played by Letitia Wright, wearing some truly badass Panther gauntlets herself. It finally ends, after the fastest minute and fifty-two seconds in history, with shots of T’Challa suited and booted, jacking up the premiums on someone’s Escalade as he flips it the fuck over, landing nimbly on his feet, like cats always do.

February 2018 is about to be the most out of control Black History Month of all time. This movie is gonna have black people feeling like Obama just came back. We’re going 32 days and you can’t stop us.